Airport Manager of the Year! 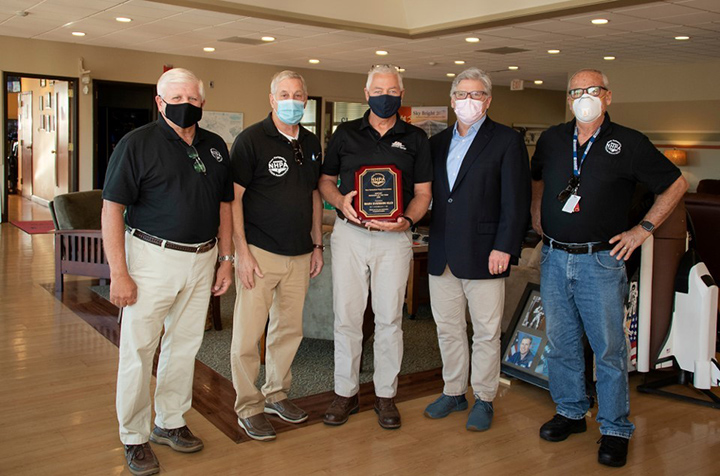 Last week the NHPA awarded our first ever AIRPORT MANAGER OF THE YEAR AWARD! The award went to Marv Everson of the Laconia Airport KLCI. Marv is a different kind of manager. He reached out to us to hold an unofficial Fly In at his airport. He worked out a plan with Lee Avery of Sky Bright Aviation to put a plan together. Laconia at that time didn’t have a restaurant on the field but they had the lunches delivered to the airport from a local restaurant.

Lee also passed on a substantial fuel saving to the eighteen planes that came! When we later approached Marv about putting a thru gate on the south side of the airport that would give pilots access to the Kitchen Cravings restaurant across the street, he was enthusiastic about the idea. Ken Costa and I have been talking about this gate for years but our previous efforts had been rejected.

A few weeks went by and we were contacted by Marv again to tell us the airport authority had approved the plan and would pay for its installation. Ken Costa of Meredith, known for his volunteering as the Sea Planes Pilots Associations NH representative, took charge of the entire effort for the NHPA and worked closely with Marv to turn an idea into a reality! Hope you visit the restaurant often!

Marv is not a “sit in his office” kind of person. It is obvious when you work with Marv that he loves his airport and thoroughly enjoys his job. Marv gets it and is a great supporter of General Aviation. His efforts will continue to draw pilots to the Laconia airport for the restaurant and other services available on the field.

We hope to recognize another champion of General Aviation next year. An airport Manager, an FBO, Avionics shop, Maintenance facility or anyone that aggressively supports our FREEDOM TO FLY!

Next →
Back to All News

The New Hampshire Pilots Association is an organization of pilots and aviation supporters dedicated to the furtherance and enhancement of general aviation interests in the state of New Hampshire.